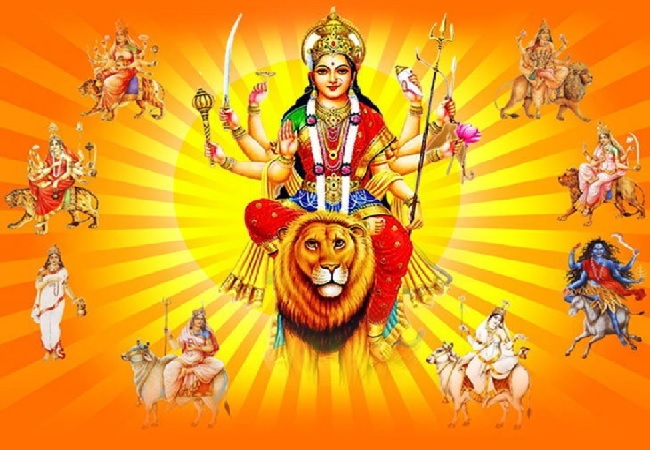 And the power of a spiritual practice in these challenging times

As I devote my life to helping as many people worldwide to reconnect to their core power, to live their purpose, and to be happy, I wanted to share the Navratri celebration with you, which is taking place worldwide from yesterday until the 26th of October.

The beginning of spring and autumn are important junctures of climatic and solar influences. These two periods are considered to be sacred for invoking the goddess Durga.

The dates of the festival are determined according to the Lunar Calendar. This feminine and divine energy nurtures and absorbs all.

Navratri, symbolizing the victory of positivity over negativity, literally means “Nine Nights” in Sanskrit; Nav, Nine, and Ratri, nights. The 9 nights of the Goddess.

During these nine nights and 10 days, the three forms of the Divine Mother are invoked: Durga, Lakshmi, Saraswati.

In order to have success in life, believers seek the blessings of all three aspects of the divine femininity, hence the nine nights of worship. Navadurga Parva is the auspicious period of Spiritual sadhana of the sublime and creative energy.

These nine days denote the awakening of Divinity — that quality of the Mother Divine that does not negate anything, yet nurtures the good qualities. Supporting the positivity in us and skillfully removing the negativity can be stimulated by invoking and awakening this Divinity within us.

Day 1: 17th of October Shailputri: Goddess Shailputri, an incarnation of Maa Parvati, is worshipped on this day. In this form, she can be seen sitting on Nandi the bull with a Trishul in her right hand and Lotus flower in her left one. The color of the day is Red, which represents courage, vigor and action.

Day 2: 18th of October Brahmacharini: On the second day of Navratri, Goddess Brahmacharini is worshipped. She is said to be one of the many incarnations of Maa Parvati who became Sati, the pure one. One worships the Goddess to attain moksha or salvation and peace. The color of the day is Blue, which depicts calmness and positive energy. In this form, she can be seen holding a kamandalu and japmala in her hands while walking bare-feet.

Day 3: 19th of October Chandraghanta: Goddess Chandraghanta is worshipped on the third day of Navratri. The name was derived after Maa Parvati got married to Lord Shiva and adorned a half-moon on her forehead. Yellow, the color of the day, depicts bravery.

Day 4: 20th of October Kushmanda: Goddess Kushmanda is worshipped on the fourth day of Navratri. She can be seen sitting on a Lion with eight hands. She is said to be the one endowing vegetation and greenery on Earth, which is why the color of the day is Green.

Day 5: 21st of October Skandmata: The mother of Lord Kartikeya or Skanda, Goddess Skandamata, is revered on the fifth day. She can be seen having four arms, holding her small baby, and riding a fierce lion. She depicts the mutating power of a mother when she realizes her child is in danger. The color of the day is Grey.

Day 6: 22nd of October Katyayani: A violent incarnation of Goddess Durga and daughter to Sage Katya, Goddess Katyayani is worshipped on the sixth day. She represents courage and is seen having four hands and riding a lion. The color of the day is Orange.

Day 7: 23rd of October Kalratri: Maa Kalratri is known to be the ferocious form of Goddess Durga and worshipped on Saptami. The color of the day remains White. It is believed that Maa Parvati’s fair skin got transformed into black in order to kill Sumbha and Nisumbha, two demons.

Day 8: 24th of October  Mahagauri: Maa Mahagauri is worshipped on the eighth day of Navratri, and symbolizes peace and intellect. The color of the day remains Pink, which represents positivity.

Day 9: 25th of October Siddhidatri: The ninth day is known to be Navami, and Maa Siddhidatri, also called as Ardhanareeswara, is worshipped. She is said to possess all kinds of Siddhis. She can be seen sitting on a Lotus and has four hands.

Chant Maa Durga Mantras throughout these days and ask for prosperity. Invite the goddess into your house and ask her to grace your house with her presence.

Other ways to use the healing power of the goddess is to chant the Durga Mantras during these 9 days and ask for prosperity. You can also invite the goddess to your house. I wish you a Happy Navratri!

Through subscribing to my newsletter you’ll receive bi-weekly to monthly pearls of wisdom, insights, and practices to help you to be limitless!